Mobile Device Management (MDM) is not a new technology or a new topic for IT leaders to ponder, but it continues to be a pertinent topic. We have noted that some organizations are still working to add MDM to their environments or more commonly, consider switching to a different MDM that better suits their needs.  Either way, choosing a mobile device management in 2021 is a far more complex issue than it was just a few years ago. The tools do so much more. The way organizations are using them has become much more integrated with other parts of IT, Security and Operations.  The good news is, you don’t have to go into this endeavor without the insights from vast experiences making these kinds of decisions and making them with confidence.

We begin with a bit of a primer on where mobile device management is now.

MDM solutions and technology has matured so much that it barely resembles the MDM tools introduced in 2009.  Aside from the evolution in the name of the category applied by the analysts, the range of functionality and focus has created a broad set of new ways of thinking about where these systems play a role in your program.  An MDM can now be a single system that gives you broad visibility into how all of your endpoints are being used, gives you centralized ability to set and enforce security and usage policy, and can even offer automated responses to changes and threats. If some of that surprises you, it might be time to reconsider your mobile device management.

The term Mobile Device Management, as a term, began as a simple set of APIs that allowed IT administrators of configure iPhones ®, but was popularized by Gartner and other organization to describe what, at one point, was over 100 companies that had tools for managing fleets of mobile devices. Those systems were all largely beholden to Apple and Google for enabling APIs to control the actual devices over the air.  As the mobile device management vendors began to add functionality for content and app management, the analyst community adopted the term Enterprise Mobility Management (EMM). More recently, the leading MDMs have added capabilities that make them the de facto choice for managing a full range of end points – including desktops and laptops – so the industry has moved to describing them as Unified Endpoint Management (UEM).  There is a lot of variation between vendors as to what is included in UEM, what sorts of end-points can be managed, and the methods that are used to achieve the outcomes. More on that below.

If you made a choice of mobile device management when it was still called MDM or EMM, then it is probably worth reconsidering your choice.

There are still many options available, but the field is dividing into a group of leaders and a long tail of niche players. The most recent Gartner Magic Quadrant for UEM (2019) makes this clear.  The leading mobile device management systems have remained the same for many years and mostly have well-rounded offerings, with capabilities across many of the parts of MDM, EMM, and UEM. With so much functionality to offer though, there are many approaches to getting the job done.

The leading systems are available through a number of ownership and subscription models.  There are systems that still reside on-premise in a data center, others only available in cloud deployments.  Some are available with perpetual licenses with annual maintenance fees and others that are available by one of many subscription models. Rob Seemann, Vice President of Sales and Marketing at Vox Mobile points out, “Our ability to offer MDM as a Service, fits into our larger capabilities for financing everything as a service or XaaS. With a single monthly fee that includes the software licenses, the hosting, as well as our administration of the environment, this has been a popular model since we began using to install and support BlackBerry servers. Eliminating up-fronts costs makes the numbers work for many organizations.”

One important question you should consider is where does this system fit with my other systems?  With such a far-reaching set of tools for managing access, enabling apps, enforcing compliance and responding to problems, you are likely to have more than one set of stakeholders with requirements – even if they don’t know to ask for them yet. You are likely to also have other systems that overlap with functionality.  A classic example is how traditional desktops are managed.  If your organization has been around for a while, you probably have two systems that support computer users – Microsoft System Center and a virtual desktop system.

System Center was an important powerful tool when it was created in 1994 and was part of the reason no other company could begin to take market share from Microsoft in desktop software for decades.  But System Center is only a valid tool if you are running Windows in a very traditional on-site fashion.  Cloud-based system and remote work require a different set of tools, and with the growing presence of iOS, Android, MacOS and Chrome devices in most organizations, it doesn’t begin to address the current need like something like VMware WorkspaceONE that includes cloud-based device management for all of those operating systems, including Windows 10.

Virtualization has matured significantly to become a critical part of every company’s technology stack, whether they know if or not.  Nearly every data center on the planet is running virtualized servers in a hyperconverged architecture.  Even if you don’t know what that means, it is important to realize that virtualization is mature, robust, and can be deployed in many ways.  The first virtual desktops started appearing while client/server architectures still were widespread back in the 1980s, making IT more about maintaining data centers than having too much to do on the end user side of things. Now you can virtualize almost anything, including desktops OS, individual apps, server OS, storage or even network appliances – all part of an approach to using resources efficiently and being able to make changes on the fly.  For end users, this means that anything they do during the day can include a mix of mobile apps, web-based apps, local apps, and virtualized apps.  Handled appropriately, the end-user doesn’t have to know any of this is happening.

If you still think about mobile device management, virtualized apps, and desktop management as separate systems, it’s probably time to reconsider your choice of MDM.

Specialized Tool or a Unified Stack

For some time, one important differentiating factor was the level of specialization that some MDMs built into their products.  There were some that focused on ruggedized devices and others were built with specific hardware vendors in mind.  Others have taken what might be called a “best of breed” approach to having a tool that is also a platform for connecting other tools – an approach that always sounds good on paper but hits snags in practice as you have to make all the members of the ecosystem follow the same rules.  The concept of “best of breed” is also a big anachronism. Large players in most software categories are able to quickly reach feature parity for things that most users are looking for.  Specialized vendors may be more nimble, but that advantage is easily overcome by large players with modest investments.

Work Styles for Mobility: You probably have more than one

Analyst organizations like Gartner have been writing about Work Styles for decades, but the concept remains an important and valid one.  If members of your organization are doing different kinds of work in different contexts, you probably should consider tailoring your technology support to each category of work or work style. Office workers have different needs than workers that spend most, if not all, of their time away from the office.  People that work in non-office environments, like warehouses, storefronts, or factories probably need devices that provide information or capture activity and those devices probably shouldn’t resemble the ones that office workers use.

This includes the important question of whether you prefer to have one system that supports all these use cases and devices or if you prefer each to have their own approach.  As an example, if you have a warehouse,  you probably have devices that are specifically made for scanning barcodes. These types of environments are typically to hazardous for a typical tablet or smartphone.  Though they are no longer supported, there are still plenty of Windows Mobile/CE ruggedized devices doing their work in warehouses all around the world and managed by an MDM – probably one that was specifically designed to support that particular OS.  If you were to start a warehouse today, you would probably use devices that look similar but that run a more modern OS like Android and are managed by something like VMware Workspace One.  Once again, the leaders in the mobile device management space tend to have the broadest capabilities, even sometimes the best capabilities. *IDC named WorkspaceONE a Leader in software for Ruggedized/IoT Device Deployments.

Vox has a vast amount of experience helping clients sort out how to use mobile device management to address complex or unusual use cases.  Travel Tab provides a wide range of technology devices to travelers so reliability and simplicity are critical. With over 40,000 devices distributed over many cities in three countries management had to be easily handled over the air.  Read more about this here.

One thing that hasn’t changed is the process for making a mobile device management decision. Rob Seemann, Vice President of Sales and Marketing at Vox Mobile points out, “We have completed hundreds of engagements for clients, helping them identify which mobile device management is best for them.  Now, as ever, clients are rarely aware of all the features and considerations that can be included in selecting their systems. It is still both helpful and eye-opening for them when we take them through the process of gathering requirements, scoring them and providing them guidance.” The feature sets are often not the most important differentiator.  Often the cost models, integrations with other systems, access to support, and even licensing models are more influential on decisions as the vendors reach feature parity quickly but the “How” ends up being more important than the “What.”

Vox Mobile has had a consulting practice for software selection since its inception in 2006. Mr. Seemann offers, “MDM selection remains our most frequent consulting engagement. Any more, it isn’t just about understanding the options, it’s about not wanting to get it wrong because it is a high-stakes decision.”

Clearly, there is much more to consider when selecting an MDM in 2020 and making a poor decision can have long-ranging consequences as can making no decision at all.  Many organizations remain stuck in old models of support for technology users that keep them from taking advantage of the most compelling aspects of modern mobile device management tools.  If you would like some help strategizing how to get Unstuck, Vox Mobile is here to help. 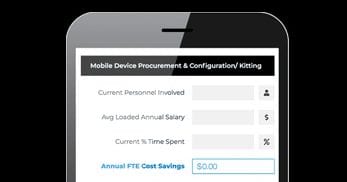